Parkin, Arkansas (population 2,025) is 42 miles east of Memphis, Tennessee, located in the Mississippi River Delta, one of the country's poorest regions. As you drive into Parkin, the area's agricultural background is obvious as the roads are lined with tractors, combines, and grain silos, alongside small frame houses. Historically, the town's school district has been among the state's poorest academic performers.

But things are starting to improve.

In 1999, 88 percent of the district's fifth-grade students scored in the lowest quartile on the Arkansas Comprehensive Testing Assessment and Accountability Program (ACTAAP) norm- referenced test. In 2000, 65 percent of the district's fifth graders scored in the test's lowest quartile. Although the district has not yet reached its academic goals, it is making progress, according to Parkin Elementary School principal Becky Gibson.

"Parkin has been on the state's academic distress list since the list was started," she says, "but we are doing better, slowly but surely."

Gibson, a 10-year veteran of the Parkin School District, worked six years as a fifth-grade teacher and one year as the district's librarian. She has been the elementary school principal for the past three years. She notes that like many other small districts in economically depressed and declining areas, Parkin has had difficulty attracting experienced educators.

Gibson explains, "We have suffered a lot in the past 10 years. That's because of one reason—inexperience. Small schools have small talent pools to draw from. Experienced teachers are drawn to larger districts with more resources and higher salaries." This situation contributes to a teacher turnover rate that is higher than average.

During Gibson's tenure at Parkin Elementary, the school's enrollment has dropped by nearly one-third, from 309 students to 214 students. In part, the school's gradual decline in enrollment can be attributed to limited employment opportunities in Parkin. But the principal admits the district's shrinking numbers are also linked to parents pulling their children out of the district to attend better-performing schools located in nearby communities. "The label of distress often affects the public's perception of the school," says Gibson.

In May 1999, with the help of the Arkansas Department of Education and SEDL's Southeast Comprehensive Assistance Center (SECAC) based in Metairie, Louisiana, Parkin Elementary introduced a process that Gibson thinks has put the school on the road to improving teacher performance, raising student test scores, and getting the district off the academic distress list—the Reading Success Network (RSN).

Administered by SECAC, the Reading Success Network strives to improve reading achievement. The goal is to have every student "reading independently and well by the end of the third grade," says Jill Slack, RSN coordinator for SECAC.

The RSN program supports a teacher's efforts in the classroom through a combination of components that include peer coaching, the use of reading and assessment tools, and data collection and analysis to inform instruction and determine appropriate intervention strategies. The program is tailor-made to fit each school's specific needs. One of the biggest challenges Parkin Elementary School teachers face is that their students come to school with limited exposure to text and print concepts and other pre-literacy skills that help ensure a good foundation for learning to read.

Slack explains that these students aren't likely to receive enrichment activities that help other children come to school ready to learn how to read. "They don't have the opportunity to go outside their backyard or their immediate area," she says. "There are certain words brought up in class that they don't understand because they've never been exposed to them . . . going on a field trip is probably the biggest experience of their life."

Most important, Gibson reports, the RSN program has given Parkin teachers and administrators the ability to network with other educators. Once a year, teachers and administrators attend SECAC's annual RSN regional meeting, where they talk to peers who face similar challenges. SECAC staff members and literacy and math specialists from the Crowley's Ridge Educational Cooperative make regular visits to the school not only to help enrich the students' learning but also to update the teachers on strategies and methods.

Parkin Elementary teachers now use student-made books, teach thematic units, develop literacy folders that travel with children from grade to grade, and structure learning based on each student's interests. Gibson notes all of these techniques are the result of participating in the Reading Success Network.

The school is also taking steps to reach out to its community. In years past, Gibson says teachers and administrators focused so much on "behavior control and classroom management" that they completely lost contact with the community. Realizing that parental involvement is vital for improved student achievement, the school initiated literacy and math nights. On these nights, parents can come into the school in small groups to help their children with their homework with the assistance of a teacher. Taking steps such as these are crucial in communities where parents are not participating in their children's education and may lack basic skills themselves. The school has also started a Lunch Buddies program, in which community members come to the school to eat lunch with students, and a volunteer tutoring program, for which the town's mayor is an active volunteer. Additionally, a character education program has been implemented across the entire district this year, targeting fifth and sixth graders at the elementary school.

"We learned about all of this from RSN," Gibson reports. "It's a wonderful resource."

Slack observes that before Parkin Elementary began participating in the RSN program, the teachers felt isolated and were yearning for information. Now that the lines of communication have been opened, Gibson expects great things for her district. "The networking was the most important thing," Gibson said. "With more access to learning opportunities, the students are better able to measure up to outside standards. The future of Parkin looks good, as long as dedicated people continue to improve the process of instruction."

John V. Pennington is a freelance writer who lives in Hot Springs, Arkansas, and contributes frequently to SEDLetter.


Next Article: Resources for Rural Schools 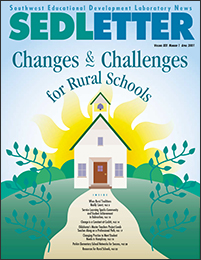