MyMoon: Engaging a New Generation in Lunar Science and Exploration

Visit the MyMoon Web site, and you'll find a hip, downtown scene from your favorite city. Instead of links, visitors click on posters that plaster the outside wall of a building. These posters advertise the site's interactive exhibits, contests, polls, and semimonthly webcasts. A squirrel, perched on a power line next to the building, calls to visitors. People are encouraged to share their experiences and ideas. "If you find MyMoon too graphically gritty for your taste," explains the About section on the site, "or get annoyed by its über-schizophrenic navigation or snarky tone, well, you just may be too old!" If the graphics, content, and tone haven't already made it clear, the developers of MyMoon want to interest GenY in lunar exploration.

MyMoon was created by the Lunar and Planetary Institute (LPI), part of the Universities Space Research Association, in collaboration with SEDL's Research and Evaluation work group. The project is funded by NASA's Science Mission Directorate and has three objectives: (1) develop a dynamic, social media learning portal that will engage the general public in lunar science and exploration, with a focus on adults ages 18 to 35; (2) host a growing audience of lunar enthusiasts that becomes involved in NASA's lunar exploration by sharing their ideas about lunar topics, creating their own materials, and participating in events and experiences; and (3) create a model for online engagement of audiences ages 18 to 35 and provide detailed evaluation data about best practices and strategies for success.

Why this approach? For years, NASA and other science organizations and agencies have successfully informed the American public about science and space exploration activities through traditional mass media. However, adults 18–35 years old, known as GenY or the net-generation, do not get their news and information from these traditional outlets. Not surprisingly, a study conducted by Dittmar & Associates of Houston, Texas, found that GenY is largely not accessed by or accessing NASA. They believe that this is due in large part to an absence of social media and communication styles that appeal to this age group. NASA increasingly recognizes the value of social media and is embracing its use in communicating the excitement of its science and exploration. The MyMoon site is a test case for this new style of connecting with an audience.

MyMoon is an experimental, evolving, participatory portal for engaging 18- to 35-year-olds in a conversation about all things lunar. We encourage you to visit MyMoon at http://mymoon. lpi.usra.edu—and while you are at it, why not tell your 18- to 35-year-old friends about it?

Not Your Father's NASA Web Site

Both MyMoon's site and content differ from that of a typical NASA Web site. Instead of providing detailed updates on lunar science and exploration, MyMoon focuses on "big picture" news items and encourages conversations about the Moon. Interactive exhibits allow visitors to explore Galileo's office desk, complete with postcards from Rome, or learn that not every culture sees the "Man in the Moon." (Some see a frog.) Another exhibit highlights the history of lunar exploration. Semimonthly webcasts allow participants to interact with lunar scientists, authors, and artists. For example, Amanda Stiles of Google Lunar X PRIZE recently presented a webcast on the $30 million international competition to safely land a robot on the Moon's surface. MyMoon staff share their opinions on lunar-related topics on the Web site's blog, "The Rover." Visitors are invited to join the conversation and leave comments on the blog. To draw visitors back to the site, new contests, polls, and blog postings appear regularly.

MyMoon also strives to engage—and involve— the GenY audience through the social networking platforms Twitter, Facebook, Flickr, and YouTube. Are you addicted to Twitter and Facebook? You can follow MyMoon on Twitter and join its Facebook group. MyMoon uses both social networking sites primarily as a way to inform followers and friends about upcoming events, contests, and new additions to the Web site. Tweets also provide lunar science and exploration news and sometimes just a random thought: "Platypus is a funny word." On Flickr, you can join MyMoon's group, Lunr. The Lunr group page includes lunar-related images and artwork submitted by MyMoon community members. To date, two contests have been held through Lunr. Most recently, users were asked to submit Moon or Apollo images that had been rendered in the style of Andy Warhol. MyMoon's YouTube channel, MyMoonLPI, is home to lunar-related videos. With time, LPI hopes to populate this channel with its own videos as well as those created by members of the MyMoon community.

SEDL is providing evaluation support for the MyMoon Web site. So far, staff have hosted a series of focus groups with GenY members to assess their lunar interests, Web design preferences, and motivations for visiting the site. The current MyMoon community is composed largely of individuals older than the target audience—more the "Apollo generation" that remembers the lunar landing. More evaluation and changes are planned to better target the intended 18- to 35-year-old demographic, and SEDL will also host additional focus groups. The results will enable the MyMoon team to more effectively direct its marketing

Throughout the project, SEDL will continue to analyze data collected from visitor feedback on the MyMoon site and hold focus groups in Houston and Austin. The evaluators will focus on drawing a representative cross section of 18- to 35-year olds based on gender and ethnicity, including both "space enthusiasts" and "space and lunar science neutral" members. Ultimately, SEDL will help provide NASA with strategies for successfully connecting with the elusive GenY audience—and maybe even future audiences.

Andy Shaner is an education specialist at the Lunar and Planetary Institute. He leads the MyMoon team and is responsible for coordinating the site content.

Stephanie Shipp leads the Education and Public Outreach team at the Lunar and Planetary Institute. An Earth scientist by training, she oversees the content of MyMoon, leaving the graphics and "spin" to the Gen Y members of the MyMoon team.


Next Article: Research Update: Encouraging Girls in Math and Science 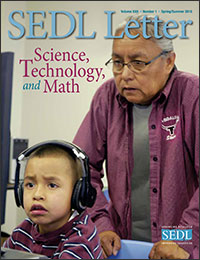