How Well Do We Pay Our Teachers?

According to national statistics, states in the southwestern region all pay their teachers less than the national average. Among the five southwest states in our region, the highest paying state’s average salary ($40,476) is 15 percent higher than the lowest paying state ($35,061) (see Figure 3).

Note. From American Federation of Teachers, 2005.

Knowing that teacher pay can vary, we sought to find out more about differences, especially for teachers in high-need schools. We found that not only do teachers need more pay to keep up with the national average, but salaries differ based on locale, student population, and school achievement level. 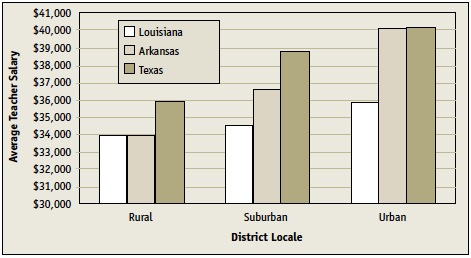 It is important to understand that teachers were paid less in rural locations regardless of their experience. Teachers in rural districts in Arkansas and Texas actually had more experience, on average, than urban teachers.

What everyone wants to know is whether teacher pay matters to student achievement.

What we found is teacher salaries are related to student achievement for math and reading in Texas and for reading in Arkansas. However, teacher pay did not impact math scores in Arkansas nor achievement generally in Louisiana.

These findings are inconclusive and point to the difficulty in fully explaining the role of salaries on student achievement. The findings fall short of providing clear guidance for state or local pay policy. We still do not know why salaries seem to matter or on what criteria we should be increasing teacher pay.

For example, a simple comparison of salary averages (see Table 1) tells us that teacher pay levels in high-performing versus low-performing districts are already on par.

Published in Insights on Educational Policy, Practice, and Research Number 19, February 2006, Getting Smart About Teacher Pay 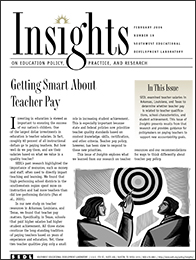