The State of State Education Data

We focused on instructional expenditure data, instructional and administrative staffing data, school and district demographic data, and student demographic and performance data. The four state data systems generally have separate databases for these different data. However, none were set up to link individual student data directly to teacher and fiscal data. Since our initial investigation in 2003, Arkansas and Louisiana have moved toward connecting each student’s data with his or her teacher’s data.

Each of the instructional expenditure databases are set up with a limited number of functions, e.g., instruction and student support. In general, each state has similar instruction function categories; however, they are not necessarily named or defined exactly the same way. The functions are divided into object categories, such as salaries, benefits, and supplies. Often additional subfunctions and subobjects are also designated. As shown in Table 1, several of the states also have instructional expenditure data by programs, such as special education and Title I. We found that the states have been consistent over time in their categorization and collection of instructional expenditures, contributing to greater data reliability, accuracy, and completeness.

Salary data was of particular interest, and in all four states are documented in both the state’s fiscal and teacher databases. The fiscal database has district or school salary averages, while the staff database records salaries for individuals. Using the individual data allows greater flexibility in looking at particular subgroups of staff, which may be beneficial in making policy decisions. Generally, the salary data is reliable; however, it is often impossible to discern some incentives, bonuses, or other reimbursements staff may receive. This makes it difficult to get a complete compensation picture. To this same end, we also investigated staff benefits. As seen in Table 2, unlike salaries, actual benefit costs per individual are not recorded by three states. Rather they are prorated using district benefit data. This further complicates decision making regarding total teacher compensation.

Data on teachers are more extensive than other staff data. In addition to the individual salary data in the staffing databases, the following data are available on individual teachers:

When relying on these staffing data for decision making, we faced several challenges. First, data managers across all four states report limited reliability with teacher experience data since they often depend on unverified self-reports from individual teachers or school districts. Crosschecking the data over a span of years would be beneficial. Second, certification databases, often housed and managed separate from other staffing databases, are cumulative and not always easily aligned with other data. And last, not all states reliably document FTE or percent time data for each position a staff person holds.

All four states have extensive school and district demographic databases. Much of the data in these databases are averages; therefore, some caution must be taken when using school versus district data to look at a particular characteristic. For example, if we wanted to know the percent of low-income students in XYZ district, we could go directly to the district database and find the answer. We could also go to the school database, find all the schools in XYZ district, then average their student income data for the answer. The problem is that the two answers may be different. Still, the school and district databases offer information useful for school or district report cards, annual state education reports, descriptive research, and required funding reports.

School databases in the four states included the following data:

We also went to the school and district SEA data to get a broader picture of the educational environment of students and staff. However, it was necessary to get additional data that states do not collect through federal databases, such as the U.S. Census Bureau and the National Center for Education Statistics. For example, federal databases designate locale information for a school or district, e.g., urban, suburban, or rural, that most of the states do not include in their databases. Also, the federal databases contain information about household characteristics of families in the school or district’s vicinity, such as household income or parent level of education. In order to use these data with our SEA data, we had to find common identifiers on which they could be merged. It takes a bit of effort but provides more detail for specific groupings or geographic areas.

Each state has different ways of complying with federal and state restrictions to ensure confidentiality of student information. Some have computerized methods to scramble student identities before providing the data. Others provide only aggregated student data at the grade or school level.

In each state a student’s data record includes characteristics, such as race/ethnicity, gender, and age. The student’s participation in programs, such as free and/or reduced price lunch, preschool, afterschool, and special education, is also available. Some states include family information, such as whether the student is in foster care or homeless. All states connect the student to his or her grade level, school, and district.

Data on each student also include performance measures. For our study, we sought only student achievement data. Other measures of student performance, such as attendance, graduation, and dropout rates, are also available. All four states have been improving their capacity to measure student performance through standardized tests. While this process has improved the quantity of these data with regard to the number of tests offered and the grades tested, it also has resulted in inconsistency in the test scores available from year to year. In each of the four study states, changes were made to the tests administered, grades tested, or scoring standards during the study period. These changes hampered getting a complete picture of student achievement over time.

Published in Insights on Educational Policy, Practice, and Research Number 18, December 2005, Enhancing Data Use and Quality to Shape Education Policy 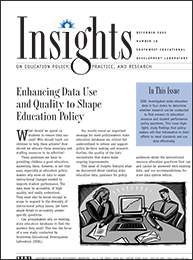