Does Money Make a Difference?: Connecting Resources to Outcomes

While researchers agree that schools consistently spend about 60 percent of revenues on instruction, experts still disagree about the nature of the relationship between spending and performance results. Using methods designed to explain and quantify an educational

An early study using production function methods is referred to as the Coleman Report of 1966. The study found that, overall, there is a weak association between school resources and student performance. Coleman and his associates instead determined that family background characteristics had a large and statistically significant effect on student performance. Scores of studies of education production functions have been conducted since the release of the Coleman Report; their results have been mixed—even conflicting. For example, economist Eric Hanushek used a method of tallying the results of statistical significance tests to summarize the results of a large number of production function studies and he found no systematic, positive relationship between school resources and student performance (Hanushek, 1986; Hanushek, 1997). Other researchers and policymakers support Hanushek's conclusions.

In contrast, Larry Hedges and his colleagues used a different technique called meta-analysis for summarizing the results of the same studies Hanushek examined. Hedges concluded that the relationship between resource inputs and student outcomes was consistent and positive and could, in fact, be used to frame educational policy (Hedges, Laine, & Greenwald, 1994). Hedges and his associates expanded their analysis in subsequent studies and reported that school inputs such as lower class size, teacher experience, and quality of teacher education are positively related to student outcomes. The effects are consistently positive and large enough to be educationally important (Hedges & Greenwald, 1996). In an experimental study in Tennessee, Achilles (1999) confirmed findings of a positive relationship between reduced class size and student outcomes.

New thinking about resource allocation suggests that resource effectiveness depends almost entirely on how resources are used in instruction. What matters is what students and teachers actually do with resources, not merely whether they are present. Following this line of reasoning, researchers point out that instructional improvement will not necessarily occur simply by increasing conventional resources such as the number of teachers, the salaries of existing teachers, the number of books, or the addition of computers. Rather, instructional improvement will depend on improving student and teacher skill and knowledge in using additional resources in instruction and learning activities. It also depends on principal knowledge and skill in enhancing the conditions that enable resource use by all members of the school community (Cohen, Raudenbush, & Ball, 2000). Considering the conflicting findings, it is easier to understand why finding the direct connection between resources and student learning has proved to be so difficult.


Next Page: Resource Allocation in the Southwest Region 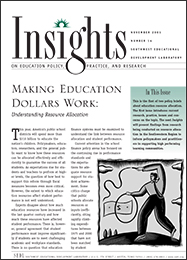