From the interview and survey data, it is evident that policymakers struggle with establishing string relationships with their constituents.

Getting to know their constituents and establishing trust are key elements that policymakers identified as necessary for doing their jobs well. These same elements build credibility for policymakers’ agendas and ultimately affect their efforts to be reelected. When SEDL researchers asked policymakers, "Do you think your constituents have a clear understanding of your views on education?" nearly one half responded "no." Even policymakers who responded positively understood relationship building to be a difficult ongoing process.

The policymaker respondents identified helping them expand their personal networks as one positive result of study circles. From the interview and survey data, it is evident that policymakers struggle with establishing strong relationships with their constituents. A number of policymakers talked about study circles as offering a way for them to broaden their education networks so that in the future they could draw upon other participants’ information and expertise. Said one policymaker, "One thing for sure . . . is I developed a much closer relationship with three or four of those people that I will see in the community and I have felt a bit more of an attachment to them." Another policymaker found that after the study circles she felt like she really knew some of the participants. She said that since the study circles, "I have seen all of them . . . and we’ve had more in-depth communication. It was like two friends meeting rather than just someone saying hello." Broader networks, in turn, increased policymakers’ connections to constituents, which enabled them to bring the public’s concerns into the policy arena and motivated them to seek policy solutions to problems of high public concern.

Study circle dialogues also increased mutual credibility among policymakers and constituents. Policymakers were able to show that they understood public needs and concerns about education and were better able to represent their interests. Constituents, on the other hand, were able to express their needs and recognize that policymakers did show genuine interest in their opinions and suggestions. A new understanding and respect for each other’s roles in public education emerged as a result. Some policymakers changed their views of teachers, in particular, becoming more sympathetic of the tough circumstances in which teachers often find themselves and more supportive of the efforts of teacher and parents in helping students to succeed.

A preliminary survey (Mutchler and Johnson, 1999) conducted prior to the "Calling the Roll" program had revealed that policymakers consider their constituents to be their single most important source of information and opinion on educational issues. But who are these constituents? SEDL’s research reveals that policymakers view their constituents as ranging from those individuals they work with regularly to the more general public with whom they work less often or not at all.

Members of the policy subsystem are elected officials, state agency representatives, and other political influencers such as education association lobbyists and representatives from political and religious organizations. These individuals

While these individuals may be members of the public by definition, they might more reasonably be viewed as part of the state policy development system—directly connected to state policymakers’ processes of information gathering and deliberation. Many policymakers rely on individuals and groups from this political arena to help them gain information on policy issues. After policymakers recognize the stances or biases, they frequently regard members of this system as important and often trusted influences during the education decision-making process.

Members of the participating public, while sometimes lacking a formal organizational affiliation, are visible influences in education decision making. They include parents, business owners, retirees, students, and educators. Members of this group

Policymakers usually connect with these individuals through constituent phone calls, letters, and email, polling, personal ties, advisory panels, and community meetings. They offer a perspective that informs decision makers of local needs and issues and helps clarify the potential impact of state policy on the schools and communities they represent.

Members of the nonparticipating public participate little or not at all in civic issues. "They are the members of the silent majority," said one legislator. Policymakers reported they didn’t understand why they do not participate, but speculated that some of the reasons included apathy, disenfranchisement, and intimidation by the political process. Policymakers said they find it difficult to respond to the needs of the nonparticipating public because they have no way of knowing what they are. Policymakers also expressed concern about the ramifications that the low level of participation by members of this group will have for democratic representation. 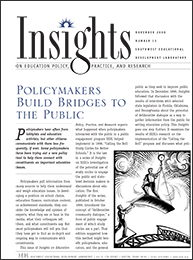