Unfortunately, a closer look at this literature reveals an abundance of anecdotal evidence regarding the success of alternative education programs, but a dearth of well-designed, scientific research. Much of the work on alternative schools explores their organizational arrangements and processes, rather than their outcomes for students (Raywid, 1994b). Moreover, when student outcomes are researched, the evaluation design often limits the study's usefulness. Many studies examine a single school or program, thus limiting the generalizability of the results. In addition, studies often fail to include comparison groups, do not use objective outcome measures, and/or do not provide pre-program baseline data - making it difficult to draw conclusions regarding the effectiveness of programs. Furthermore, some research combines different types of programs (for example, some may include magnet schools in a study of dropout prevention programs), thus creating ambiguous data.

Although the research is not ideal or comprehensive, it suggests that students in alternative education programs do indeed perform well academically. A well-designed, large-scale research project in Oklahoma revealed that students in alternative education programs improved on a variety of academic measures, including grades, attendance, number of courses failed, and disciplinary referrals. In addition, the students outperformed similar students not enrolled in an alternative program on these same measures (Oklahoma Technical Assistance Center, 1995). Individual alternative programs in a variety of rural and urban communities in California, Michigan, New York, and Oregon also report student improvement on several academic measures, including attendance, dropout, grades and test scores (Butchart, 1986). 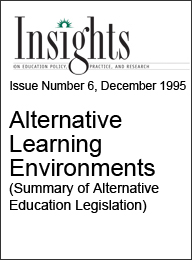