Home | Issues ...about Change Archive | Confronting And Managing Culture In A Changing Environment

Confronting And Managing Culture In A Changing Environment

Change literature describes effective school improvement as a process that requires three to five years to implement, with appropriate facilitation (Hall & Hord, 1987). Additionally, theorists like Vroom and Yetton recommend the use of bottom-up rather than top-down strategies (cited in Hoy & Miskel, 1987). As change researchers, we believe this approach reduces the intensity of resistance throughout the implementation process and may result in quicker, deeper, and more widespread investment in and institutionalization of change.

When change is implemented in any other fashion, such as top-down or mandated, we are frequently quick to judge this approach as less effective. Believing that the need or imperative for change has not been identified by staff (who will ultimately be responsible for implementing the innovation), we fear strong and long-lasting resistance may ensue, accompanied by cursory implementation.

It's interesting that because this particular approach does not conform to "our" paradigm about how change should be effected, we view it as ineffective, rather than as different or as appropriate for a particular context. "Our" paradigm, as defined here, refers to the standards of effective change implementation that were created, studied, and prescribed by researchers (who in most cases represent mainstream culture) and by those few individuals from other cultures (this author) who have been indoctrinated with these same values.

But as our nation's population becomes increasingly diverse and as its communities become more racially and ethnically integrated, can we expect "our" paradigm of change to fit these communities? Different ethnic and racial groups may have different views about change. If their views are antithetical to ours, do we condemn them for their actions and judge their handling of change as ineffective? Or, as educational researchers studying increasingly diverse and distinct schools and communities, should we consider that there are alternatives to the use of a mainstream model for implementing change. Before passing judgment, we should study these schools with an open mind. We should consider the cultures found in these schools and in these greater communities, and we should examine the effects of these cultures on staff behavior, on school management and on student outcomes. We may find in these non-mainstream communities, leaders who are managing and implementing change in ways that are quite different from the standard paradigm, and yet are just as effective, particularly for their culturally and linguistically diverse communities. The story that follows is one example of such a situation. It is the story of a visionary superintendent in a rural Hispanic community, who implemented systemic change targeting at-risk students.

This paper presents a description of the site where this study was conducted, the inception of the innovation, the implementation process, and the outcomes. An analysis and discussion of the findings are also provided.

Published in Issues ...about Change Volume 5, Number 4, Confronting And Managing Culture In A Changing Environment (1995) 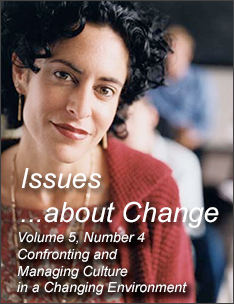