The 1990s: Putting the Pieces Together

“Given our roots in LBJ’s vision for a Great Society, our institution has always had at its core two ideas. The first is one of purpose, with a central focus on serving the education needs of children in poverty. We do so in the belief that a quality education is the best mechanism for freeing individuals and society from the ravages and inequities of poverty. The second idea is one of instrument, with a central focus on bridging education research and practice. We do this in the belief that the delivery of quality education must be founded on a knowledge base supported by evidence and applied with wisdom.”

As the 1990s began SEDL joined other research and development leaders in seeking solutions that incorporated lessons learned from both the successes and the failures of the past. Why had so many of the instructional innovations of the 1960s and early 1970s disappeared from the educational landscape? Why hadn’t more of them moved into widespread use? With the federal investment in education once again expanding, the R&D community explored critical questions as to how to bridge the persistent divide between policy and practice, and how to sustain and scale up innovative approaches.

The ESEA was reauthorized as the Improving America’s Schools Act in 1994 under the administration of President Bill Clinton. It pushed states to develop standards-based systems applicable to all students—even students served under Title I. It also recognized the need to maximize teaching and learning in core academic subjects and the need for intensive professional learning focused on improving teaching and learning. 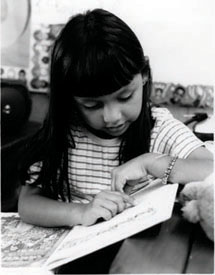 As a result, much of SEDL’s work throughout the 1990s focused on simultaneously supporting the smallest unit of change—the individual classroom teacher—and ensuring that the entire infrastructure of schooling in the United States, from the classroom all the way to state and federal policies and programs, were operating in synch.

Through its federal funding, SEDL addressed policy alignment and comprehensive reform strategies, and continued work in the areas of language and culture and family and community involvement. Staff also piloted new efforts addressing rural education and the use of technology to strengthen student achievement. In 1992, under the leadership of future CEO Dr. Wes Hoover, SEDL established one of 10 regional consortia focused on the new standards-based reforms in math and science instruction. Also in the 1990s, SEDL went national with its disability work; the National Center for the Dissemination of Disability Research, first piloted in 1991, still functions today strengthening the quality and relevance of disability research.

Dr. Wesley A. Hoover: Strengthening the Research Base

By the time Dr. Wesley A. Hoover was named president and CEO in December 1996, he had spent 17 years at SEDL, developing an understanding of the institution—and the persistent education issues SEDL works to address—that is both broad and deep. He began his SEDL career conducting research on teaching reading to bilingual children. Later he directed SEDL’s institutional assessment unit, establishing and overseeing a rigorous quality assurance process for all institutional products and services. In the early 1990s he took over a struggling project focused on using community resources to strengthen science instruction in rural settings; this work led to the creation of SEDL’s Southwest Consortium for the Improvement of Mathematics and Science Teaching, which Dr. Hoover directed from 1992 through 1996.

During Dr. Hoover’s tenure thus far, SEDL has initiated a number of new efforts and doubled its resources, with 2006 being the most prosperous year ever for the institution. Dr. Hoover has also led SEDL to take a more rigorous approach in research and development and expand our reach nationwide.

In 1996, Preston Kronkosky retired from SEDL, and Wes Hoover was named president and CEO after a nationwide search. Dr. Hoover brought a strong research and evaluation perspective to the office of the president, an orientation that has served the organization well in the past decade. Under his leadership, SEDL greatly expanded its program evaluation work, moving beyond a focus on the institution’s own work to conduct evaluation studies for a variety of other state and local programs.


Next Article: Importance of Family and Community Involvement Continues to Grow 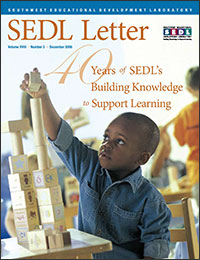