Fossil Findings: Research in the Field Leads to Changes in the Classroom

The crystal clear waters of the Devils River in Texas. The biodiversity of the foothills in the Oklahoma Ozarks. The irregular limestone at the karst topography sites of Arkansas. These are all classrooms for the teachers participating in SEDL's Teachers as Leaders Field Science Academies. In another SEDL classroom, the Rio Grande Rift Basin in New Mexico, teachers not only uncovered new ways to reach their students through field research, but they also unearthed fossils dating back 3 million years.

Offered through the SEDL Eisenhower Southwest Consortium for the Improvement of Mathematics and Science Teaching (SCIMAST), the summer academies are designed to teach the use of inquiry strategies and to help KÐ12 science teachers align content with standards and experience learning through inquiry. 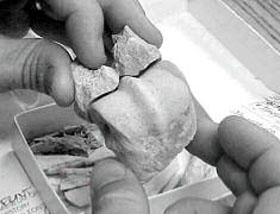 Participants in SCIMAST's Rio Grande Rift Basin Teachers as Leaders Field Science Academy found this fossil joint—the main joint in the lower leg of a fossil horse, Equus scotti. It is the equivalent of a human wrist joint. The entire leg was later reconstructed from the group's fossil finds.

In June, 14 teachers from SEDL's region returned to the Rio Grande Rift Basin—a hot, dusty site off Interstate 25 near Albuquerque—to build on the work they had done during the 2002 field science academy. Geologist Sean Connell from the New Mexico Bureau of Mines and Minerals discovered the site in 2001 while making stops at freeway outcrops. He then contacted Gary Morgan, curator of Vertebrate Paleontology at the New Mexico Museum of Natural History and Science, who began more intensive research work at the site. For this research, he collaborated with Steve Getty, a geologist and educator at Biological Sciences Curriculum Study, a nonprofit corporation in Colorado Springs.

In June 2002, Getty and SEDL program specialist Nikki Hanegan brought 16 teachers to the site to work with Morgan. Since then, the teachers—some of whom visit the site throughout the year—have had a hand in discovering more than half of the fauna uncovered at the site, including parts from cats, horses, llamas, foxes, dogs, rabbits, and rodents from 3 million years ago.

"Teachers are very visual," Getty said. "Once we got more of their eyes on the site, we learned they had a tremendous eye for picking little objects out of the outcrop. Our collection list just started growing."

Morgan and Getty believe the Rio Grande Rift Basin site is one of the richest in North America from this time period. After studying the bones and comparing them with other specimens at the museum in Albuquerque, Morgan will archive the bones to document the fauna in the central Rio Grande Rift Basin. "Such collections are valuable to geologists on a continental scale when reconstructing continental faunas," Getty said. By compiling a number of 3-million-year-old sites and comparing them with sites dating back 2 million, 5 million, and 10 million years, geologists can reconstruct a coherent picture of changes in mammalian fauna, or evolution, on a continent.

"So our knowledge and understanding of faunal succession in the fossil record relies on detailed work from hundreds and hundreds of these fossil sites," Getty said. "It's exciting when teachers can contribute to such endeavors."

During the first Rio Grande Rift Basin academy in 2002, Getty made sure teachers—whose backgrounds vary regarding grade level, content knowledge, and experience—started on even ground. He divided the group into teams of three or four teachers each and assigned them classification and diagramming exercises to familiarize participants with the general geology of the rift. As they learned more about the site together, the teachers' anxiety levels decreased, Getty said. "We all worked together and drew from each other's strengths in both content knowledge and teaching experience."

On the first morning of the 2003 academy, Getty gauged the teachers' areas of interest, identified working teams, and assigned miniprojects for a presentation forum at the end of their five days together. While some groups did more detailed mapping of the rift basin's stratigraphy, others studied rift volcanism of around 3 million years ago, screened for and separated small mammals, or investigated the sedimentation to the east of the Rio Grande Rift into neighboring Texas. "We wanted them to do more inquiry and research on a topic of their choice," Getty said.

Dave Million, a science teacher at Las Cruces High School in Las Cruces, New Mexico, said he enjoyed the opportunity the academy provided him to be a student instead of a teacher despite the hard work in the heat alongside a highway: "You're exhausted, but your mind is recharging because you're doing firsthand exploration—you're not just reading about it or watching a video. You're actually out there doing something, and that makes it so much more personal and important to you."

Million and the other teachers studied volcanic evolution in the Rio Grande Rift Basin of the past 5 million years and worked to determine how the bones arrived at the rift-basin site. Because of the variety and number of pieces, the teachers think the area might have been a physical collection site as a result of transportation or deposition. Or it might have been a watering hole for a number of animals.

"Getting teachers to think hard about why all these bones are located at one site is one of the most pure, raw forms of inquiry," Getty said. "We discussed how the learning process involves making sense of the experiences they have as learners."

A New Way of Teaching

As the teachers are learning, they are thinking about how their students learn as well,Million said. What happens when they assign material to their students? How are students digesting this material and connecting all of the pieces of information to construct understanding? Are they using inquiry to do that?

"I've never done inquiry-based teaching before," Million said. "But I'm definitely gearing up to do it. I want to let the kids take hold of their own educations and go in the directions they want to go rather than tell them where to go. It's a really hard way to teach."

Getty believes these teacher experiences are more important than creating a notebook filled with science lessons and take-home activities for academy participants. "You have to be patient. It would be much easier for me to drive people around on buses and point out sites, but I'm not sure they'd really learn anything. Doing the actual work makes them synthesize what they're learning."

Hanegan and Getty are helping academy participants teach science through experiments and fieldwork in their own backyards rather than just through textbooks. "We train the teachers to use their own natural elements instead of sending them home with fossil kits," Hanegan said. "They learn about nature in general so that they can apply their new knowledge with their students in their own environments."

Sarah Wilson, a science teacher from Eldorado High School in Albuquerque, did just that. After her first SEDL field science academy with Getty and Hanegan three years ago, Wilson began to move away from teaching geology by the book to teaching geology through New Mexico. She said with Getty's expertise in local geology and Hanegan's educational techniques, "I totally redid the class I was teaching." Wilson's first academy featured lessons on constancy and change, which she brought home to Eldorado High. Instead of teaching in a linear pattern, as most scientific organisms seem to progress, "I tried to go in a more cyclical pattern with a systems approach," she said. Wilson started her lessons with something specific from New Mexico's geology to which her students could relate. From there, she worked out to a more global picture of geology.

During her first lab of the school year, Wilson takes her students outside her school building for four days to study the inactive volcanoes surrounding Albuquerque. "There are five small volcanoes easily visible to the west, and then there's a very large volcano about 100 miles west of us that they can see," she said. "They see different types of volcanic structures and results of volcanic flows that they had never noticed before." 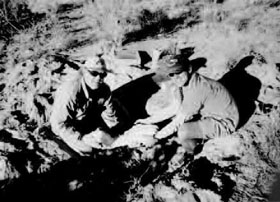 On six weekends during the semester, Wilson takes groups of students to some of the sites she has studied during the SEDL field science academies so they can see what she has experienced. This year, she hopes to incorporate the geologic time scale in her curriculum better by discussing some of the paleontology work she did in June at the Rio Grande Rift Basin fossil site. She is also helping another geology teacher at her school take advantage of more fieldwork professional development opportunities.

Wilson said her new approach to teaching is helping students understand that geology is more than just "studying rocks." She believes that "one of the best things you can do for students is connect them to something—once they're connected, they just understand better." Plus, sharing her experiences and the photos of her academy work with her students builds Wilson's credibility with them. "The students respect you that much more if you've done the actual work," she said. "Now I'm an expert, too."

For more information on the Teachers as Leaders Academies, visit the SCIMAST Web site at http://www.sedl.org/scimast/teachers_as_leaders/field_science/field_science.html (site no longer available 11/2005). 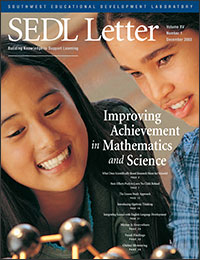