In addition to the literature that promotes whole-staff involvement, there is other literature that addresses the professional learning community whose membership is not the entire staff of a school or the whole secondary school department.

One sort of community stretches across a number of schools, where individuals learn from and support each other in order to increase their effectiveness for students. An excellent example is found in a report by Wood (1995) that described how mathematics teachers from several districts in New Mexico engaged in community learning activities to improve mathematics teaching and student mathematics achievement. Spears and Oliver presented a paper at the 1996 annual meeting of the American Educational Research Association that focused on a community of learners where collaborative learning structures were developed among a regional college, the state department of education, and a cluster of rural schools.

Peterson and Brietzke (1994) described collegial and collaborative cultures that "require both time and structured opportunities for joint work" (p. 10). Similarly, Reitzug and Burrello (1995) described how a continuous school improvement culture can be developed among independent individuals; and Guskey and Peterson (1996) gave direction to creating learning communities in smaller units, such as the school improvement council.

In a unique setting, a learning community was established among representatives of six of the nation's ten regional educational laboratories funded by the U. S. Department of Education. Laboratory staff have been meeting regularly for six years to study school restructuring efforts. The members have contributed information and skills development to each other, sharing their expertise and encouragement. They not only learn with and from each other, but they have posed the hard questions about how they have gone about their work and why and have explored how to improve their effectiveness. Consequently, the work has shifted in focus and operation, with multiple collaboratively developed products as a result, the most recent a book on student voices in school reform (Restructuring Collaborative Laboratory Network, 1997).

Finally, though, the citations in this review that focus on whole-staff professional learning communities are both reinforcing in their reported results and divergent in the information provided. The study and understanding of learning communities and their creation is, however, essentially in its infancy. Much is yet to be known. One immediate need is research that would seek more descriptive examples of how professional learning communities function and how contextual variables influence what they look like and what they do. As noted, a target for study should focus on the factors needed for consideration in creating such organizational arrangements: what the conditions are and who does what, including the school's neighborhood community and the public at large. Creating professional learning communities in the nation's schools is a primary goal. The current paucity of information about the process is frustrating for would-be creators of such communities. But, it reminds us again of the complexity of the change process and of the myriad factors that affect human endeavor and behavior.


Next Page: In Conclusion 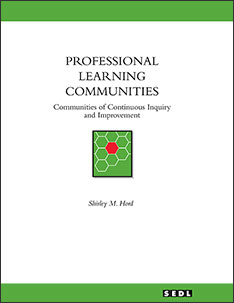