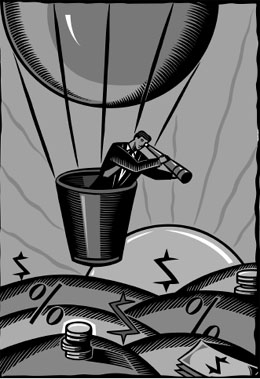 During our notion's early years, education was usually locally or privately funded. By the early 1900s, disparities in per pupil revenues and expenditures became so noticeable that the foundation program was developed to ensure that schools received adequate support without overburdening districts that had limited taxable resources. It is still used by most states today. Under the foundation program, states set a target resource level for each district that is theoretically adequate to provide a basic education. Using a uniform property tax rate, each district raises money to meet its share of that resource level. The state funds the balance with the effect that poorer districts receive more money to help meet the foundation level. States differ in the amount of foundation-level funding and how that amount is calculated. Adjustments and modifications to the foundation level to compensate for the costs of serving special populations of students, such as English language learners or special education students, also vary from state to state.

Despite the use of the foundation program to equalize resources, there are still inequalities due to the large role local funding plays in school finance. As Peter Schrag writes in Final Test: The Battle for Adequacy in America's Schools, "People in poor districts could tax themselves to death without being able to generate as much per-pupil funding as affluent districts could with ease" (p. 74). Inequalities also exist because of differences in the ways states have established their foundation programs. In some states, districts may choose to levy tax rates above the required level. Also, certain wealthy districts may be able to generate the target per-pupil revenue at a tax rate below the required tax rate. In other states, districts are allowed to choose per-pupil revenue or tax levels that are below the foundation level (Augenblick, Myers, & Anderson, 1997, p. 65). Yet another concern with the foundation approach is that states often do not update the foundation level to keep up with inflation or with increased spending needs of districts as they try to meet current educational standards. 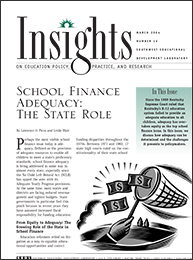