Is it Feasible for State Policymakers to Participate?

This second consideration—feasibility—is equally important to state policymakers interested in gaining public input and opinion through deliberative dialogue. Face-to-face, sustained dialogues with community members may be an unfamiliar experience to most—particularly when these interactions are designed to elicit honest yet civil expressions of experience and opinion about schools and the state of public education.

"There will be some gains [policymakers will] see in the short term, but it's the long-term advantage—the long-term benefit it brings to the political process."

The prospect of participating in such a new and different exchange with constituents can raise special concerns for state policymakers, ranging from questions about the deliberative dialogue process itself to its intended impact. The answers to these questions will directly influence their perception of how worthwhile the experience will be—and thus determine their willingness to participate.

When the 30 Arkansas and Oklahoma legislators who responded to SEDL’s mail survey in 1998 were asked to suggest ways to encourage legislator participation in community-wide study circles on education, their answers flagged three factors in particular that might represent feasibility issues for state policymakers.

Incentive. Legislators and other state policymakers must weigh the many invitations they receive to participate in community and organizational events. They are likely to look for information in the invitation that tells them how participating might help meet their goals as state decision makers. A number of the legislators surveyed said that, for them, encouragement to participate is simply a matter of “just ask,” but others indicated there may be special needs for information in that invitation if state policymakers are likely to decide to participate.
One suggested that constituents deliver a personal invitation to the policymaker: “have local parents ... [or] ... local schools ask them.” In addition, one legislator responding to the survey said, “Guarantee broad community involvement and the legislators will want to be there.” Still another indicated a need for information on “[dialogue group] make-up and context of meetings.”

Time. A major feasibility issue is likely to be the time commitment required for participation—particularly the scheduling of dialogue sessions during the day and week. State policymakers are already burdened by competing obligations due to their multiple roles as private citizens, employees, and public servants. Other respondents raised the need for program implementers to avoid election years and the months during legislative session, which could indicate either a time concern or a desire to avoid politicization of the process.

Political safety. State policymakers may be sensitive to the context for public dialogue and want to be confident their participation will take place in a “protected” environment. One of the survey respondents insisted there needs to be an assurance that the dialogues “would not be, or devolve into, some … attempt to force a narrow view upon the community.” As there is always the possibility that an individual participant will attempt to disrupt the deliberative process or attack the political views of other group members, a policymaker will want to know about the ability of program organizers and discussion facilitators to manage the process as it is designed. 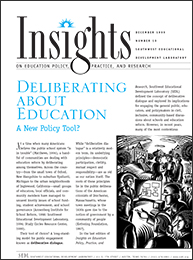