Polls show that most Americans today believe the nation’s school system is in trouble (Mathews, 1996). Evidence suggests that public support of public schools has declined. Growing interest for alternatives to public schools, such as independent charter schools and private school vouchers, indicate the public has lost touch with the ideal of public schools as the glue binding a diverse, democratic society (Bradley, 1996). “What appears to be a web of interconnected problems prompts us to say that everyone has to rally round and pull together as a community in order to combat these threats,” says David Mathews of the Kettering Foundation. “But that isn’t happening with the public schools” (Mathews, 1996, p. 2).

One key to gaining public support of schools is communicating the complexities of education. Community support is crucial to successful public schools. Taxpayers fund public schools; voters approve bonds and elect officials. Improving election turnouts and increasing the level of respect for and confidence in schools, especially among people who know only what they read from media reports, is essential for successful public schools. To be supportive, parents and community members need to understand the challenges educators face and how school districts are dealing with them.

An open, two-way, deliberative dialogue can give communities the tools for getting involved and for understanding the realities educators and students face in schools.

Paul Houston, Executive Director of the American Association of School Administrators, believes educators should improve communications with the public and can do so by “creat[ing] a whole structure within our communities to allow us to get our message to the public more directly” (Houston & Bryant, 1997, p. 758).

Deliberative dialogue can provide this structure and allow both administrators and teachers to communicate on a level playing field with non-educators. They can educate fellow community members on the basics of funding, state mandates, or limits on time and resources. But they can also listen to community perceptions and try to understand why they differ from educators’ realities. Education professionals may find that this openness to community opinion may itself encourage support.

The public might be more likely to support schools and education-related laws and policies when decision makers listen to their concerns and opinions. People need to be able to make their concerns known. When the public is left out of the decision making process, they sometimes assert themselves by blocking efforts that can only thrive with widespread support (Briand, 1995). Mathews suggests that the solution for bringing the public back to public schools is for the mission for education to come from the purposes of the community. “No plan for reform or reorganization should be attempted without looking at its impact on what appears to be a very fragile relationship linking the public and the schools” (Mathews, 1996, p.8).

The Education Week (1996) series “Divided We Stand” begins with a story about Olmstead Falls, Ohio, a town which had a tax levy for schools on the ballot in 1994. School administrators and board members chose to listen and dialogue with the town rather than engage in the traditional public relations campaign to solicit support for more money. They held a “state of the schools” meeting and did small group dialogues to hear what was on the community members’ minds. By listening to concerns and “gripes” about the district, which may have kept the town from supporting the bond issue, the school board was able to respond to the concerns. The levy passed (Bradley, 1996).

Connecting the public at the local level with its schools and helping people understand the programs and reforms being considered and implemented is the first step to restoring a sense of community around schools. School reforms and efforts are better supported, better understood, and more effective when communities are involved in schools. Those who get involved with resolving the issues the schools face will more likely recognize their role in making schools successful and are also more likely to vote for school-related bond issues (Houston & Bryant, 1997). An open, two-way, deliberative dialogue can give communities the tools for getting involved and for understanding the realities educators and students face in schools.


Next Page: Involving Parents and Community in the Schools

Published in Insights on Educational Policy, Practice, and Research Number 9, October 1999, Speak Up! Engaging Policymakers with Educators and Communities in Deliberative Dialogue 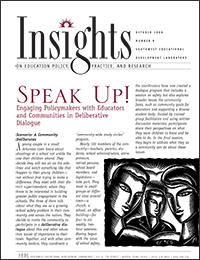