Home | Issues ...about Change Archive | Inclusion: The Pros and Cons

Input from Legislation and Litigation

Legally, integration is a civil rights issue, not a philosophical or educational trend. Federal courts have made clear that if a child can "feasibly" be integrated, segregation is illegal, regardless of the school district's philosophical perspective on integration. (Ringer & Kerr, 1988)

As mentioned previously, parents of children with disabilities, advocacy groups, and others became more vocal and politically active in the 1950s and 1960s. Court decisions and legislative efforts began to change the way America treated its disabled. Their efforts were significantly strengthened with the passage of the Education for All Handicapped Children Act (PL 94-142). This act, signed into law by Gerald Ford in 1975, embraced two hallmark components for children with identifiable disabilities. It mandated that all children were to be afforded a "free appropriate education." Further, this public education was to be delivered in the "least restrictive environment." Since then, schools, parents, and others have struggled with finding the balance between the appropriateness of educational services and the location/environment in which those services are found. Essentially, inclusion is primarily an issue addressing this second component of least restrictive environment.

The Individuals with Disabilities Education Act of 1990 (PL 101-476), which updated PL 94-142, further strengthened these two components by strongly encouraging that students with disabilities be educated in their home-school, regular-education classroom whenever possible. Specifically, it mandates:

It should be noted that the law does not abolish all settings except the regular classroom. Indeed, it requires more restrictive alternatives when the regular classroom has been shown to be inappropriate, thus the need for a continuum of placement options from the regular classroom to institutionalization. However, the intent of the law is that the rightful place for educating students, regardless of special need, is with neighborhood peers in a regular education classroom setting unless that setting is inappropriate. "In plain language, these regulations appear to require that schools make a significant effort to find an inclusive solution for a child" (Rogers, 1993, p. 2). But just how far are schools required to go? In recent years, several decisions indicate that the courts are giving more serious consideration to the inclusion of children with even severe disabilities in mainstream education. However, none of the decisions has ordered full inclusion, and several have alluded to the possibility that mainstream education may not be appropriate as a given student advances through school. Currently, the legal system is depending heavily on the reasoning in Daniel R.R. v. State Board of Education (1989) to make decisions regarding inclusion.

Daniel R.R. was a six year-old boy who had been identified for special education because of moderate retardation. His developmental age was between two and three years. He was placed in a pre-kindergarten for half a day and a special education class for half a day. However, when Daniel's kindergarten teacher reported that he was not succeeding because he required almost constant attention and was not mastering skills, the school wanted to remove Daniel from the regular classroom and place him in special education full time. The parents protested the change in placement and requested a hearing. Because Daniel was found to be receiving very little educational benefit from the regular class and was diverting too much of the teacher's time, the hearing officer found for the school district. The case was taken to the district court, which affirmed the hearing officer's decision. The parents then appealed to the Fifth Circuit Court of Appeals. In deciding the case, the Circuit Court developed a two-pronged test to determine if the district's actions were in compliance with the Individuals with Disabilities Education Act (IDEA):

The Daniel R.R. test has been used to decide whether a school district is meeting the letter and the spirit of the IDEA's stated preference for mainstreaming in such highly visible cases as Greer v. Rome City School District (1991), Oberti v. Board of Education of the Borough of Clementon School District (1993), and Board of Education, Sacramento City Unified School District v. Rachel Holland (1992, 1994). Particularly in the latter decision, the court further refined the first "prong" of the Daniel R.R. test to include four factors that schools must consider before removing a student to a more segregated setting:


Next Page: So What's A School Leader To Do? 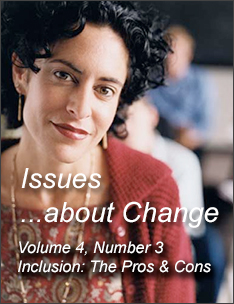