Home | Issues ...about Change Archive | Year One and Year Two: What Do You Do in Comprehensive School Improvement?

Year One and Year Two: What Do You Do in Comprehensive School Improvement?

During the summer of 1998, the Southwest Educational Development Laboratory (SEDL) began a partnership project entitled Facilitating Implementation of Reform Strategies and Tactics (FIRST). A two-year initiative, FIRST partnered staff from SEDL's Strategies for Increasing School Success (SISS) program with staff at five schools - one in each of the five states defining SEDL's service region - Arkansas, Louisiana, New Mexico, Oklahoma, and Texas. These initiatives would differ from former models of school improvement. FIRST partnerships would be long-term, broad scale, in-depth, "joined at the hip" partnerships focusing on the identified needs of the schools and including all relevant staff. Identified needs were not limited to a particular program or organizational aspect of the school, but could encompass curriculum, instruction, assessment, classroom management, professional development, parental and community involvement, school management, and a consideration of how these parts functioned as a whole to create a particular school culture. 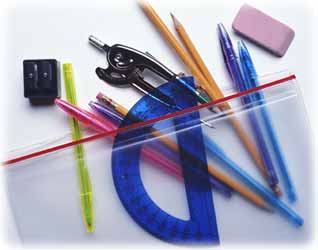 For two years, SEDL staff provided information, guidance, and technical support for improvement efforts determined by the school personnel. FIRST schools collaborated with SEDL in conducting interviews, surveys, and observations about the course these improvement efforts took, including major accomplishments and stumbling blocks. The entire school program was examined and prioritized; specific academic areas and/or organizational structures were chosen as the focus of improvement work at each of the FIRST schools. The intent of the FIRST project was to develop the capacity of school personnel to plan, monitor, and continue improvement efforts. To that end, technical assistance providers were enlisted and coordinated with SEDL staff's work to assist the schools during the FIRST initiative.

FIRST schools represented the region's diversity on many levels; three high schools (Banner, Community, and Pelican), one middle school (Tall Pines), and one K-8 school (San Fernando) were chosen. These schools, whose names are pseudonyms, served students across a range of ethnic and socioeconomic backgrounds, and struggled with issues both specific to their schools and common to many schools (e.g. low student achievement, lack of parent involvement).

In the course of the research into school improvement strategies and particularly through the first year of experience in partner schools, SEDL staff identified and confirmed the primacy of five core issues for school improvement efforts. The staff's analysis of school issues and strategies for advancing school improvement was framed within these areas: focus of the improvement work, organizational structures that support school change, personal and social dynamics of the individuals and organizations involved, the widening circles of contexts that influence school work, and leadership that can influence all of the preceding.

Much of the first year of SEDL staff's work was devoted to becoming familiar with the school culture and context, and building relationships with school personnel. First year efforts tended to identify the issues that impeded school improvement. As these issues had often been hidden by routine and low expectations prior to the partnership, many participants became discouraged as improvement efforts caused these issues to emerge or re-emerge.

Major tasks facing the SEDL staff in the second year thus included maintaining momentum in ongoing change efforts, continuing relationship-building, and celebrating accomplishments as they occurred. SEDL partners had built trust with school staff in their roles as external change facilitators - neutral parties in district, school, and interpersonal politics. In order to advance change efforts and maintain this trust, SEDL personnel focused their efforts on each school's identified needs, with particular attention to the five core school change issues.


Next Page: Focus of the Improvement Work

Published in Issues ...about Change Volume 9, Number 2, Year One and Year Two: What Do You Do in Comprehensive School Improvement? (2000) 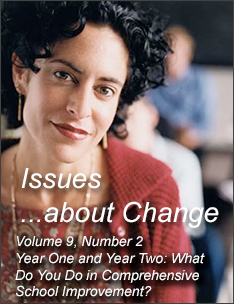