Co-Developers: Partners in a Study of Professional Learning Communities 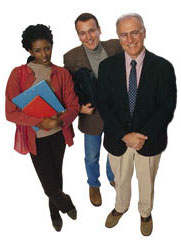 Changing schools is highly challenging, complex and messy work. Although it is not unlike change undertaken in other types of organizations, some would propose that educational change entails more than the average amount of complexity and uncertainty.

How to manage, guide, and lead such change in schools has been an enduring question. During the eighties, the research clearly indicated that the role principals played was of great importance. However, in the nineties, an emerging literature began to report a more democratic and participatory approach, one that invited all professionals on the school staff into inclusive leadership focused on school change and improvement. School staffs operating in this way came to be known as professional learning communities (PLCs) (Hord, 1997).

The purpose of this Issues paper is to report one aspect of a national study focusing on the concept and development of Co-Developers in the Creating Communities of Continuous Inquiry and Improvement (CCCII) project at Southwest Educational Development Laboratory (SEDL). The paper focuses on the concept, selection, role definition, preparation, support, and development of a group of Co-Developers that engaged with SEDL in the work of school improvement.

Through its 1997 review of the literature regarding PLCs (Hord, 1997), SEDL had come to understand the substantial benefits PLC schools provided for both teachers and students. In PLCs, staff experience reduced isolation (Lieberman, 1995; McLaughlin, 1993); increased commitment and vigor to the mission and goals of the school (Lee, Smith & Croninger, 1995; McLaughlin, 1993); greater commitment to change (Bryk, Easton, Kerbow, Rollow & Sebring, 1993); higher levels of trust (Kruse & Louis, 1995); and greater opportunities for professional development that connect individual needs with the school's collective mission.

The literature review SEDL conducted also helped to identify the five defining characteristics, or dimensions, of a PLC: supportive and shared leadership, shared values and vision, collective learning and application of that learning, supportive conditions, and shared personal practice (Hord, 1997). Through its research conducted from 1995-1998 on existing PLC schools, SEDL developed a deeper understanding of these five dimensions in action, as well as some insight into strategies for creating PLCs. While this research revealed much about the way the schools existed at the time of the studies, they did not impart rich descriptions of how they came to be PLCs. Only through studying schools in the process of developing a community of professional learners could the full, rich detail of such an endeavor be captured.

Therefore, SEDL designed a three-year project aimed at learning how schools develop as professional learning communities . The project's first challenge was determining how to meaningfully organize and staff such an effort. After reviewing laboratory resources, but more importantly, reviewing SEDL's previous experience in working with practitioners across the region's educational system, an innovative idea emerged. Why not invite colleagues from the Leadership For Change Cadre2 to participate in fleshing out the design and implementation of a project that would increase understanding about creating PLCs while doing this work in local schools? Thus was born the idea of creating a corps of education professionals from this previous cadre, called Co-Developers, who were able and willing to enter schools as external agents of change.


Next Page: Conceptualizing the Co-Developer Role 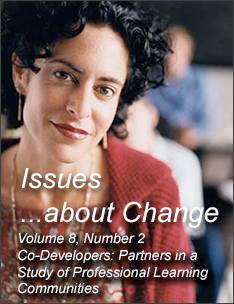