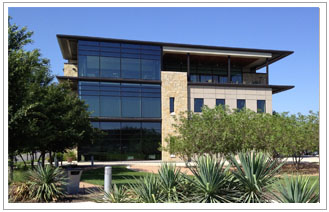 AIR's Austin office is located in Austin, the capital of Texas and home to the highly respected University of Texas. Our building is situated in East-Central Austin in the Mueller Development. This 700-acre master-planned and sustainable green community is the first in Texas to earn the silver certification in Leadership in Energy and Environmental Design (LEED), a third-party program that rates buildings, neighborhoods, and communities on green construction, environmental quality, and smart growth.

The Mueller Development, which is still expanding, features a mix of single- and multi-family homes, a town center, and business and retail sites as well as parks, replanted trees saved from building sites, and hike and bike trails. We love it here!

A new weekly farmers’ market to open at the Mueller Development in East Austin. More than 40 local growers will sell seasonal produce and other goods each Sunday. TexasFarmersMarket.org

Forbe's calls Austin one of the U.S.'s Biggest Brain Magnets, the #1 Next Big Boom Town in the U.S., and perhaps the best city in America

Kiplinger's Personal Finance Magazine rates Austin #1 of 10 Best Cities for the Next Decade.

Wall Street Journal says Austin is one of the top five cities for young adults.

Forbes listed Austin #2 in the list of 10 cities where Americans are relocating.